As Freddie’s birthday week rolls on, some of her past and present canine and feline friends wanted to check in and wish her the best. Of course, they’ve all had the good sense to be immortalized in art by Todd! Amos, Piper, Clooney, Tango, Lily, Max, Sugar Baby, Jake, Dori, Arlo Jean, Panama, and Gertrude wish you all the best. 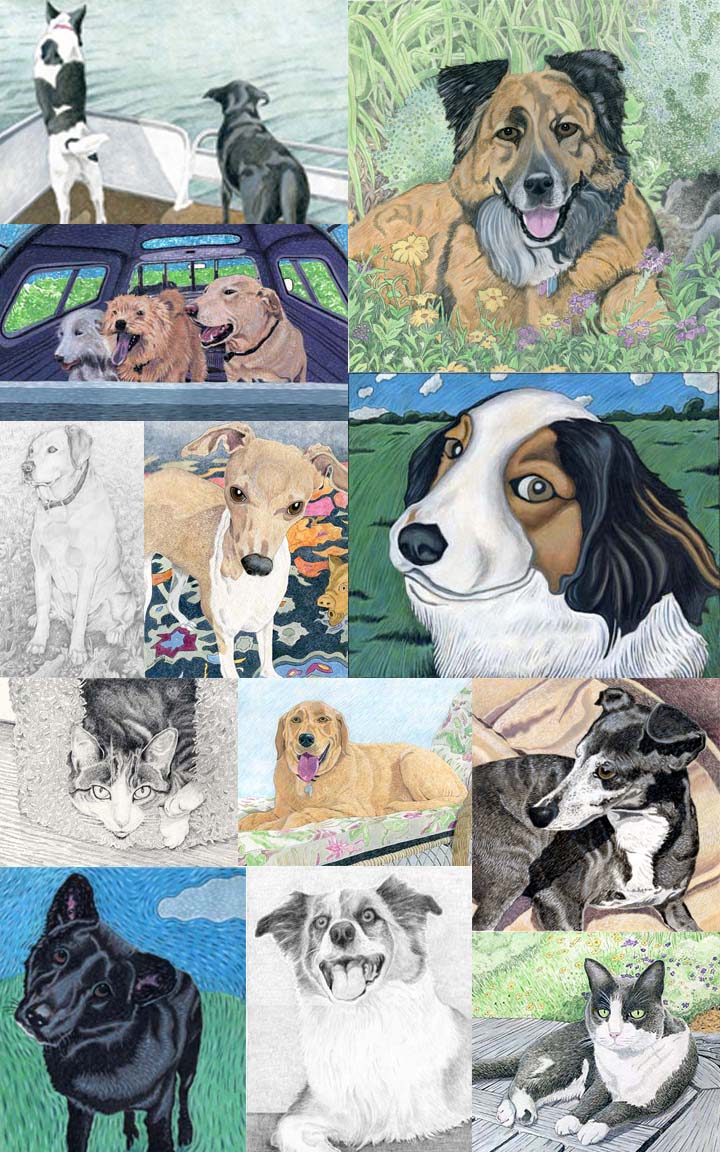 Yesterday we celebrated our Freddie girl’s 13th birthday but no celebration for her would be complete without remembering Joey, her best friend for 12 years. They were inseperable from the moment they met and what fun we all had over the years. 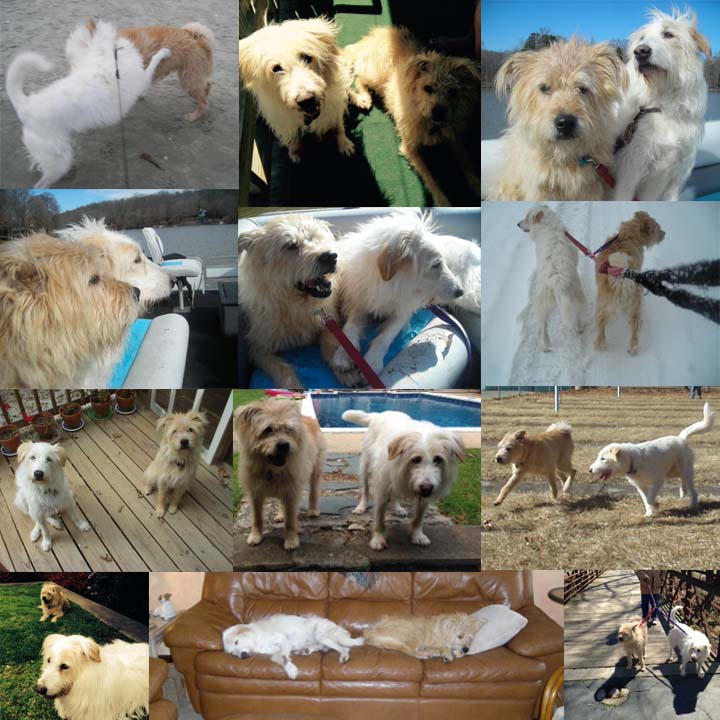 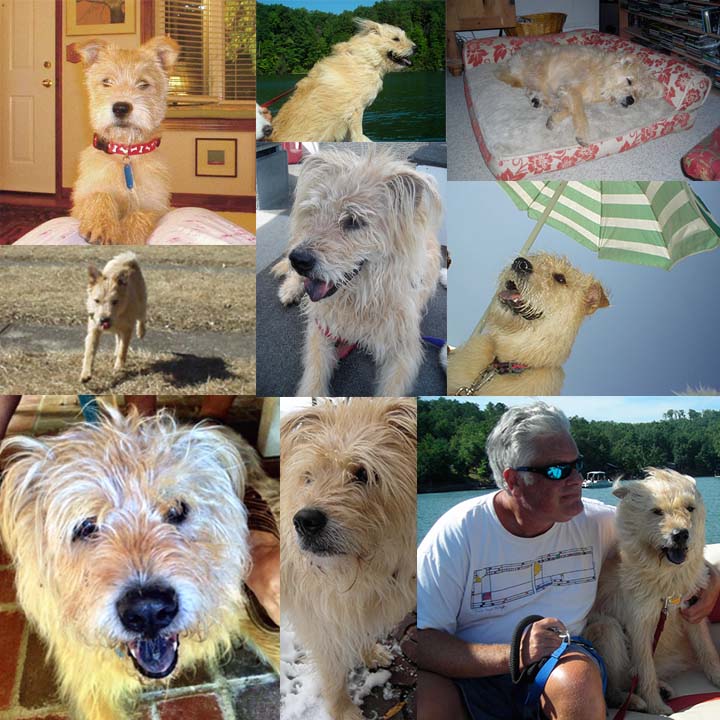 When she can fit it into her busy schedule, Jimmydog’s Chief Canine Officer Freddie likes to blog occasionally. Here she reflects on a momentous life passage, turning 13.

A big thing happened to me not too long ago: In December, I turned 13! I would have told you all about it earlier, but I got distracted by some chipmunks who decided to move into the backyard. Plus, Stephanie and Todd Belcher, the best people ever, said it might look like I was shamelessly seeking birthday presents. Of course, they had a point. I don’t need any gifts: I have absolutely everything I could ever need. Boxes filled with bones and toys. A warm, safe house. Soft, comfy places for sleeping. The best food and treats. Plus, through my job as chief canine officer at Jimmydog, good medical and dental. I am a lucky dog every day of the year.

But that doesn’t mean the birthday itself wasn’t special. It was chock full of wonderful extras. I got an extra walk, an extra car ride, an extra nap and an extra bone after dinner. It was all extra special for, as Stephanie said, an extra-special girl.

My birthday usually sneaks up on me until the day arrives and Stephanie wakes me up with a “Happy birthday, Freddie girl!” But I’ve been waiting for this one. I’d heard 13 is a big deal. Apparently, I’m something called a teenager now. And from what I’ve gathered, it means that I’m no longer a young pup (though you can’t tell by looking ’cause I look pretty darn good). Also, I can stay up later at night (though I don’t understand why I’d want to—there are so many fun things to chase in my dreams). But the main thing is that teenager-time is when you can drive. So, any day now, Stephanie and Todd will tell me it’s time to start practicing my driving and after that get my license and then pure freedom!

Have I told you before how much I love to go places in the car? The park is best but I’ll go anywhere. How cool will it be when I can drive myself?! I’ve been studying Stephanie and Todd as they chauffer me around. I think I’m pretty clear on the rules of the road. For instance, I know that I when I’m behind the wheel, I can’t hang my head out the window to catch the breeze in my ears—window gliding is strictly for passenger dogs. Also, if I get tired, I need to pull over and take a nap in the back seat. I’ve practiced a lot and am really good at that part of driving. I’m hoping now that I’m a teenager, Stephanie and Todd will start thinking seriously about how they are going to modify the sedan for me. (God, I hope they don’t think I’m going to drive the van, affectionately known as the “Doggie Van Gogh Gogh.”  No girl looks cute in a van.) It’s probably going to take a while and I want that thing to be ready on the first day I can get my license. I’m already working on my best head tilt/ear perk for the picture.

In the meantime, I’m going to enjoy being 13. I feel more mature already. I sleep a lot more, as I hear teenagers like to do, and I take it a bit easier during the day, not running around the house barking needlessly as I sometimes did as a pup. If I bark now, it’s because I mean it. That’s the kind of thing that comes with maturity: You have a better sense of what’s important. If Stephanie and Todd haven’t learned by now the potential dangers lurking inside the big brown truck—don’t get me started on the big white truck—I can’t help them anymore.

I’m more mature, yes, but I feel fabulous. I’ve slimmed down a bit recently (not an ounce of puppy fat on me), my coat looks good (especially after a nice bath and a blowout), my eyes are bright and I’ve got plenty of energy, when I choose to expend it. Which makes it all the more confusing that when we go to the vet—which we do way, way more often than I think is prudent—we get something called a “senior wellness checkup.” Senior? I’m not even a freshman. And believe me, I am well, so why do we need to keep proving it to the vet?

Please take a moment to check out our favorite local animal welfare organization UNchain Winston. They build free fences for dogs chained 24/7. They also provide other resources for pet owners in under served populations in our community. 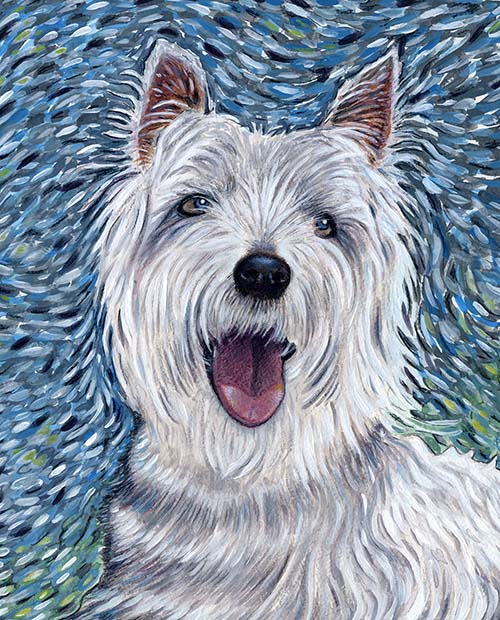 Be still and listen. The Earth is singing . . . 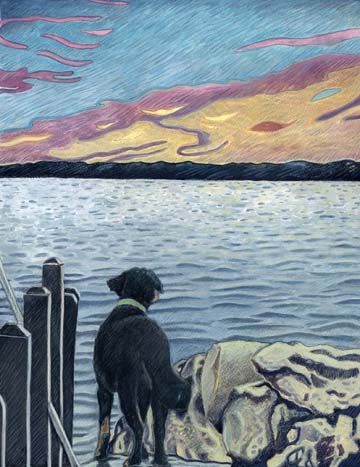 He puts his cheek against mine

and makes small, expressive sounds.
And when I’m awake, or awake enough

he turns upside down, his four paws
in the air
and his eyes dark and fervent.

Could there be a sweeter arrangement? Over and over
he gets to ask.
I get to tell. 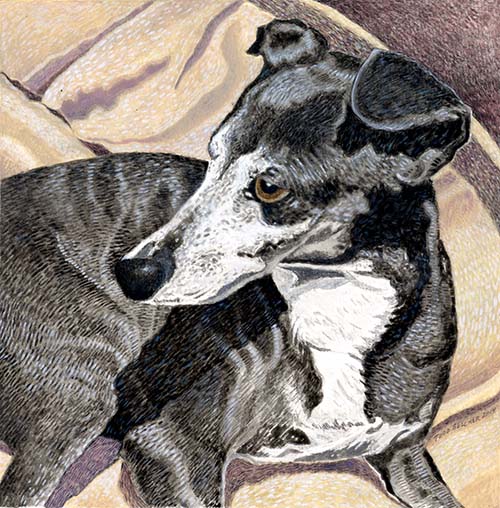 “Cats’ whiskers are so sensitive they can find their way through the narrowest crack in a broken heart.” 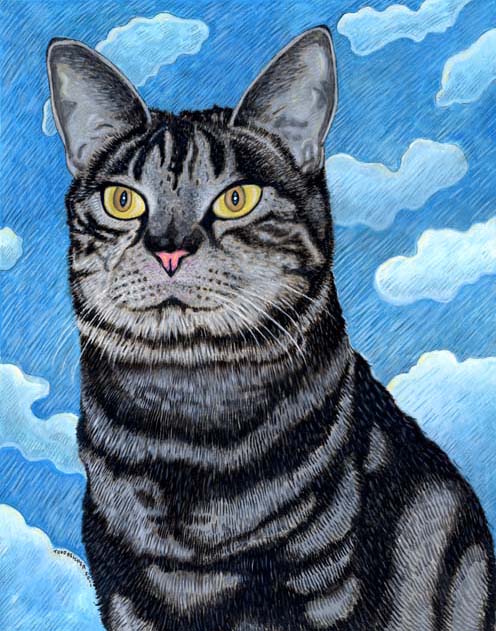 Everyone thinks they have the best dog and none of them are wrong.
?#?bestdog? ?#?lovedogs? ?#?Ipaintdogs? 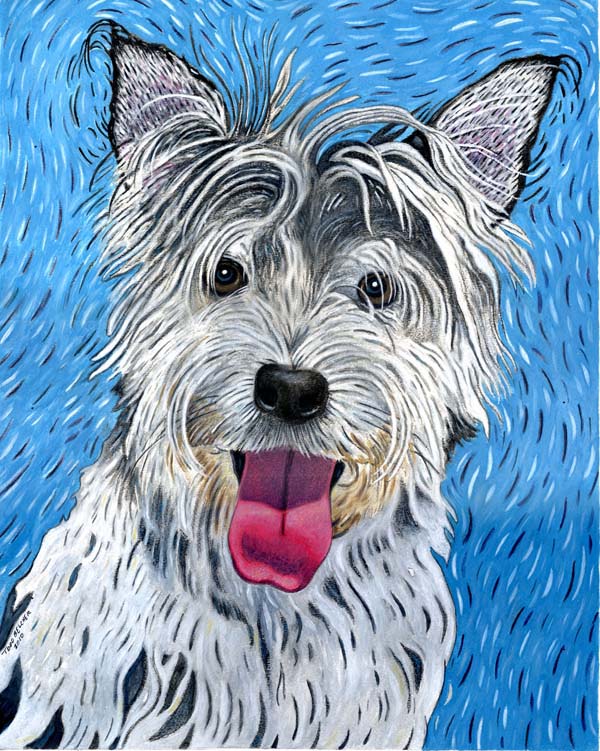 Thank you Deborah for sharing your framed portrait with us. We love getting to see them finished and ready to hang. “Picked up the finished product yesterday and we could not be more pleased The matting and frame seems to just make the portrait “pop” Many thanks to both of you for all of your efforts.”
?#?dogs? ?#?dogart? ?#?lovedogs? ?#?Ipaintdogs? ?#?Ipaintcats? ?#?Ipaintpets? 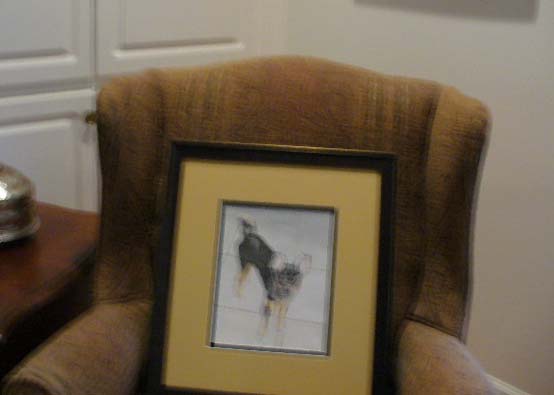