Renowned portrait artist Todd Belcher has only a few openings left for custom portraits that will be ready in time for Christmas.

Don’t miss the opportunity to give that special someone on your holiday shopping list, a gift they will love forever. Contact us today!

A custom portrait of a beloved pet or family member is a unique gift that becomes a treasured keepsake and valued piece of art. Todd creates portraits from photos using pencil, colored pencil or acrylic paint. Sizes to fit any budget. Gift certificates also available.

Helper Elf and Chief Canine Officer Freddie is ready to take your order! 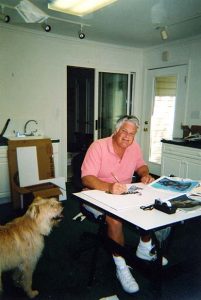 Meet Otto. Todd’s latest painting is here to help you chase away those Monday blues. Those soulful eyes and adorable ears are sure to make you smile! 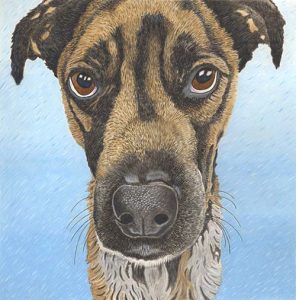 The power of the bark!
8:29 pm |
Author: Stephanie | Category: Uncategorized | Comments: None 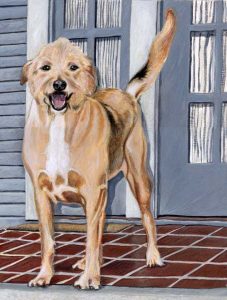 Recently, Freddie, Jimmydog’s semi-retired chief canine officer, compiled a list of her 10 favorite things, from walks to boating to vacations. And that got her thinking of the things she’s not so fond of: Why can’t there be more delicious stuffed bones and fewer baths? Why not abolish trips to the vet and spend more time lying in the grass? She’s sure her dog friends, if not their people, will agree wholeheartedly with her list of her 10 least favorite things. And she feels so much better having gotten this all off her chest.

Dear friends,
I worry a good bit, but I’m not a complainer. That said, there are some things that have been troubling me—some for a long time (like trips to the vet) and some more recently (like attacks of angry bees). Without such bothers, my life would be nearly perfect! Stephanie suggested that writing down all these irritants would make me feel better, so I’ve come up with a list of my top 10 least favorite things. I do feel a little better now, though I’d be happiest if you, my dear readers, could help eliminate them all from my life. I think you’ll agree they are terrible, and I’d be forever grateful!

10. Strangers: As I see it, there are two kinds of dogs in the world. Slobbering, indiscriminate goofballs who run up to every stranger thinking they might have snacks and discerning dogs who like to know something about a person before a formal introduction. I, if you haven’t guessed, fall into that second category. If you see me in the park, a friendly wave and a greeting of “What a pretty girl”—from a distance—is perfect. After we’ve gotten to know each other, I will let you pet me.

9. Separation: Stephanie, Todd and I are a pack, which means we should be together at all times. That’s the first rule of being a pack. I didn’t make up the rules, though I try my best to enforce them. Once when we were visiting friends, I found myself outside while Stephanie, Todd and everyone else were inside, I tore off a storm door so we could be reunited. And that’s why we have a strict open-door policy within our own house.

8. Bicycles and skateboards: These unpredictable wheel-y things take up space on dog-walking paths and make weird whirring noises as they go by. Plus, I think they are used by dognappers to quickly scoop up attractive dogs like me. “But you love cars!” you might say. You’re right, but dogs can ride in cars. They take us places! Bicycles and skateboards are not dog-friendly conveyances. Yeah, yeah. I’ve seen those skateboard-riding bulldogs, too. That’s not normal. Ban the bicycle, I say!

7. “You have to stay home.” I believe those are the five ugliest words in human language. “You have to stay home” is even worse than “We are out of treats.” (I actually never hear that second one because Stephanie is excellent at keeping me in treats.) And, honestly, Stephanie and Todd don’t leave me home alone very often. We usually travel in a pack and if they must do people stuff inside a store or office building where I can’t go, I stay in the car. Yet sometimes it’s too hot for me in the car or they have go into a people-only building for too long and I get left at home. I register my displeasure every time, dramatically lowering my head in a show of sadness and walking slowly to my bed. Poor me!

6. Baths: Can I get an “amen,” dog friends? Even dogs who love to swim hate baths, which get rid of all the natural perfumes we’ve carefully layered on ourselves. I actually get showers rather than baths and am thankful I don’t get taken to the groomer. I hear other dogs’ people talk about the “doggy spa” and my dog friends tell me it’s more like a torture chamber. They put bows in their fur! Unacceptable! Ban the bath! Scrap the shower!

5. Rain: A gentle rain is a great soundtrack for a nap, but rain should only fall at night, when it doesn’t interfere with naps and outings. Daytime downpours can ruin everything. Todd and I recently got caught in one during a walk in the park. He thought we should run to the car, while I protested the storm by walking extra slow. Take that, rain!

4. Bees: I don’t know what I did to the bees, but they are after me. I think they might even have a “Most Wanted” picture of me in their hives. I’ve been stung a lot. Once at a park, I passed out from a sting and Todd had to carry me up a hill to the car. Now he brings Benadryl with us and it makes me feel better. Oh, wait. I just had a thought: What if the bees are security guards for ground squirrels? That would explain everything!

3. Hot days: Many of my other dislikes are caused by hot days—the bees sting me more on hot days; I can’t always go on car rides on hot days. And, I hate to admit it, but as I get older, the heat gets to me more. Bring on the cold, clear days of winter!

1. Missing Joey. My best pal Joey crossed the Rainbow Bridge a few years ago and although I like being an only dog and getting all of Stephanie and Todd’s attention, I miss him. My people are the best people ever, but they aren’t good at chewing bones, chasing moles or clashing in the snow. You need a dog friend for things like that. Joey sometimes writes us letters from the other side of the Rainbow Bridge and it sounds like he’s having a good time with Jimmy, Stephanie and Todd’s first dog. I’m not ready to join them yet, but when it is my time to cross, the first thing I’m going to do is ask Joey if they have snow beyond the Rainbow Bridge. And then we’re going to play and play, no bees allowed. 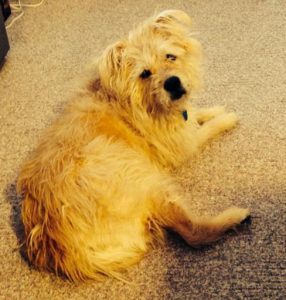 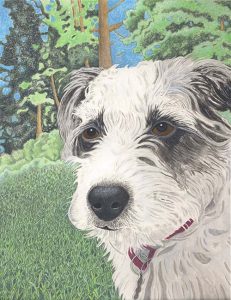