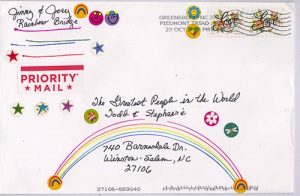 Dear Stephanie & Todd,
One night over bones, Joey and I got to talking about how much you seem to like these letters from us – we make sure to tune our TV to channel 740 to watch you open and read each one. And we thought maybe other people would like updates from their pets who’ve crossed the Rainbow Bridge, too.

So, we set out to explore other neighborhoods and see who we could find. On the day of our most recent outing, Joey and I needed to get back to our neighborhood by midafternoon to welcome new arrivals (remember in our last letter we told you about our jobs as ambassadors for the Rainbow Bridge Newcomers Club), so we called a LegLyft. Just give a “woof” and one of the yellow driverless cars shows up. We love LegLyfts – all the windows stay rolled down so we can catch all the smells with our noses. You should see Joey’s ears fly as we speed off!

The first neighborhood we came to looks a lot like ours: little houses for each pack of animals, plenty of streams and woods to explore, a food court in the center, and a grassy park for big meetings and parties.

Those are pretty much standard features for every neighborhood, and then each has its own cool stuff, too, like neighborhoods with lot of cats have ropes courses with climbing towers. (Cats love to scurry up towers and look down on us dogs!)

This new neighborhood we visited had a giant mud pit next to the central park and that’s where we found Teak and his pal Austin, who invited us in to play. We shouldn’t have been surprised, but guess who else we ran into there? Bear the pig, Esther’s friend from Happily Ever Esther Farm Sanctuary

Bear was happier than a pig in, well, you know! Bear was there with his dog friends Shelby and Reuben, who we helped welcome to this side of the Rainbow Bridge last summer, and Alice, their enormous dog friend who had just the briefest stay with Esther and her family before crossing the bridge. Alice is a big beautiful girl who towers over Shelby and Reuben and then giant Bear stands up and she looks tiny! They are all doing great together, playing a lot and, of course, keeping a close on eye on all their many friends back at the sanctuary in Canada. Esther’s pals have made some new friends since they got here and were hanging out that day with Elvis (a cute little guy dog, not the singer) and Elvis’ friends Jordon and Bailey. (I think I spied Elvis and Shelby smooching, but I can’t be sure. Elvis might have been licking off a speck of mud on Shelby’s nose, like any considerate boy would do.)

After we were good and tired, Teak said he was hungry and asked if we wanted to grab a snack. We sure did! We said goodbye to everyone and climbed out of the mud bog, instantly clean and dry. (No baths with those stinky shampoos here — ever! Oh, except for the birds. They love a good splish-splash!) Teak is a white husky so the three of us looked quite handsome together—a trio of shiny, fluffy white dogs trotting over to the food court where we settled down under a table. Joey and I ordered a plate of ribs to share (mostly so we could chew the bones) and Teak got a bowl of chicken soup, a plate of chicken livers, eggs and a pupuccino. That pup can eat!

With our connections on the Newcomers Club, we have access to reports on all the animals’ previous lives. Teak’s mom and all the friends he made through Stepping Stones Canine Rescue took great care of him, but he had serious health problems, spent a lot of time with the special vets and never could put on much weight. Boy, things have changed! He’s definitely husky now (Ha! Another joke!). Like all the animals here, Teak only remembers the love and good times from his other life, none of the bad, and we would never remind him about it. As Newcomers Club members, we took a secrecy oath by peeing on a sacred tree and we take that very seriously.

Teak wanted to show us his house and once we got there, we could see why. He and Austin have the biggest toy box, full of plushies, balls and chewies. Teak dove into the pile, tossing Joey and me his favorites to play with. What a generous guy! Too soon, it was time for us to go.

We said our goodbyes but right as we were woofing for another LegLyft, we saw Teak’s next-door neighbor Kingston heading down the path in his red trailblazer shoes. In his previous life, Kingston had to wear shoes for traction. Now he wears his ruby “Wizard of Oz” footwear as a fashion statement. And although both his ears work great now, he likes to keep the right one folded down like he did before. We were so taken with Kingston’s spiffy look, we almost didn’t see his little buddy Java. We knew they were together though because where you see one you always see the other— truly BFFFs, best fur friends forever. They had late lunch reservations at Che Kibble, Kingston’s favorite fancy restaurant, where they serve tasting bowls of kibble and flights of toilet water from around the world. For dessert, they were planning on stopping by Pancakes Aren’t Just for People, a little stand in the food court that serves pancakes and waffles all day long. They invited us to join them but we had to get going. It had been a long, busy day and we still had work to do in our own ’hood.

On our way home, Joey and I talked about what good lives everyone enjoys here. When Teak and Kingston lived on the other side of the bridge, their people talked a lot about what lucky dogs they were – that was true! And here, that lucky streak continues forever, for all of us!

P.S. We can’t figure out how to send letters anywhere other than your house. Maybe you can pass these updates from our friends along to their people through the Googlewebernet or InstaFace – you know what we mean, those computer things that people can’t stop scrolling through. We’ll write more soon! 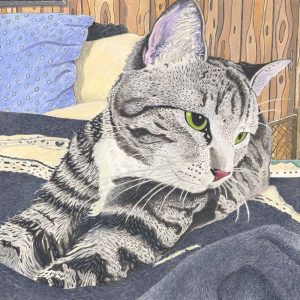 From the lovely Luna and all of us here at Jimmydog Pet Portraits (even CCO Freddie), Happy National Cat Day.

We believe that every cat should have a forever home where they are safe, warm, loved, cherished and regarded as FAMILY.

We believe that cats are PURfect best friends and are among the funniest animals on the planet.

We believe that life just isn’t the same without a cat in it.

We believe in adoption to help reduce the number of unwanted cats that flood shelters and rescues every day.

We believe in spaying & neutering as a way to end the suffering and overpopulation of cats around the globe.

We believe that no matter where a cat comes from, being a cat parent is a precious gift and a responsibility one should not take lightly. Please make sure you can properly care for a cat before you commit to opening your heart and home.

They are your world and you’d do anything for them. This holiday season, capture your memories with a custom pet portrait for yourself or someone you love. Todd can capture the personality, character and soul of your pet like no one else, but don’t take our word for it. Our happy clients tell it the best.

Here in NC, it may still feel like summer but the calendar tells us that the holidays will be here before we know it! Capture your memories this season with a hand painted, custom portrait of your best friend. There’s still time to place your order for holiday delivery. It’s the most special gift a pet lover can receive, but don’t take our word for it, listen to what past portrait recipients have to say. 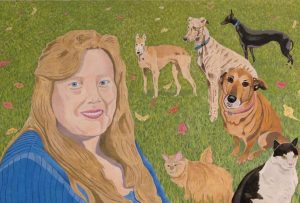 Todd’s latest portrait is full of memories. A mother who died too young painted with all the beloved pets she shared with her family. A loving gift from a daughter to her step-father to honor and remember the woman and pack they loved.