Jimmydog Journal: The Adventures of Jimmy • By Todd Belcher

There once was a dog name Jimmy. Abandoned as a pup, Jimmy was adopted by North Carolina artists Todd and Stephanie Belcher. The fluffy fellow filled their lives with joy. After a long and happy life, Jimmy passed away in 2003. When the husband-and-wife team formed their own design firm, they named the company after their faithful companion. The following are a few of Todd’s reminiscences about Jimmy and their adventures together. 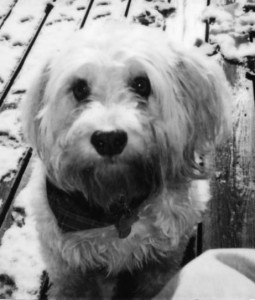 This is one of our favorite photos of Jimmy.

A Walk on the Wild Side

The path first went up a hill, passed a field of cows to our left and then leveled off near a rock quarry, which was originally mined for the building of the parkway. Below the quarry was a spring surrounded by a number of large rocks. Jimmy would run a few feet ahead of us, and he would often explore the rocks at the spring and quarry. We were lucky never to have encountered mountain lions or bears, although we did occasionally see a deer or two. We would sit atop a large rock, looking at the landscape below. At one spot, we could see the silhouette of Grandfather Mountain. Our daily walks lasted about an hour or so, and they were the highlight of his and my day.

Jimmy was usually well behaved on our walks except on one occasion when Stephanie took him shortly before dusk. While he typically ran past the field of cows without incident, on this evening he turned left off the path and ran into the pasture, barking at the cows — some of which started running toward him. Stephanie called for him but he remained with his bovine buddies. She chased him among the cows until it got dark. Then she went back to the house to retrieve a flashlight. A few minutes later, there she was, standing in a field of cows, waving a flashlight, and yelling at a disobedient dog. Some of the cows even started to approach her but thankfully, Jimmy eventually tired and acquiesced. Luckily, this never happened again.