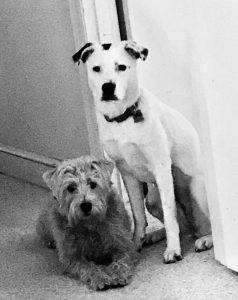 Do not disturb. Important meeting in progress! 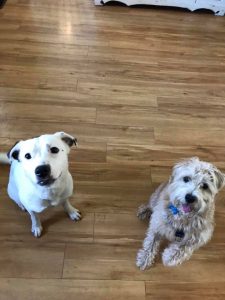 Chief Canine Officer is a BIG job. To ensure adequate play and naptime, the many responsibilities are best shared. After an exhaustive interview process, we’re very excited to introduce you to Luna, Miss Sally’s co-CCO in training. She’s off to a great start and we feel sure she’ll be a wonderful addition to the team. 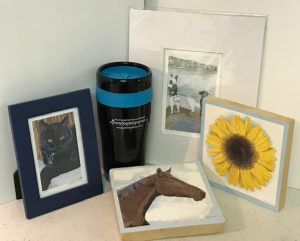 February will soon be coming to a close and on Friday we’ll be drawing for our 2nd Top Fan of 2020! Plenty of time for you to get in all the fun. Keep liking, commenting and sharing our posts for your chance to win a Jimmydog Travel mug and art print item. Be on the lookout Friday am to see if you’re the winner! Items pictured are similar to the type of art print the winner will receive. 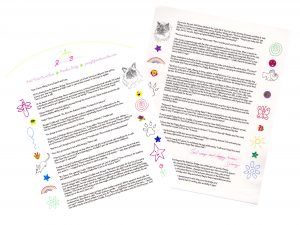 Our Jimmy, Joey and Freddie are doing such a great job on the rainbow bridge welcoming committee making sure all who cross are quickly settled into their wonderful new homes. We never know who they may meet and are so appreciative when friends share the wonderful letters Jimmy sends letting them know their loved ones made it across and are doing well. Thank you to our friend Missy & family for sharing Jimmy’s note after they said goodbye to their beloved SImon Puff.

Hi! It’s Jimmy from the Rainbow Bridge. We’ve been having a really nice time getting to know your dear boy Simon since he arrived and I didn’t want to wait another moment to send you an update. There’s so much to tell!

On the day he crossed the bridge, Simon sauntered across, turning it into his personal catwalk! He looked so handsome with his soft, luxurious fur and unique markings that several cats in the arrival area pushed their way forward to get a glimpse of him. “Is he a cat-lebrity?” I heard one of them ask her friend.

“Simon! Welcome!” I woofed, making my way through the crowd of cats. Simon looked around, his tail twitching slightly, taking everything in.

“Hello!” Simon meowed. “So, this is the Rainbow Bridge! I’ve heard a lot about it.”

My pals Freddie and Joey and I introduced ourselves, explaining that we’re ambassadors for the Rainbow Bridge Newcomers Club and that we’d been specifically chosen to help welcome him, show him the hotspots and get him settled into his house.

“We’re pets of UNchain Winston volunteers, too,” Joey added. “We’ve gotten to know your siblings — Ryoku, Tenchi and Okami, even Hugs and Kisses, and Skittles and Jinx. Great group! They’re waiting for you at the house, putting finishing touches on your bedroom so everything is purrfect when you arrive.”

“Now that you mention it, I am a little hungry,” Simon said.

“Then let’s eat,” I said. Although we dogs often use LegLyfts to get around, cats usually prefer to walk rather than ride, so we set off at a leisurely pace. We hadn’t gone far before Simon whispered, “Are we part of a parade?”

Freddie, Joey and I exchanged confused glances and looked around to see the cats from the arrival area following not far behind us. Then I noticed there were females of all species — cats, dogs, potbellied pigs, even a parrot — stopped along the street to watch us pass by.

“No, Simon. Not a parade,” I said. “I think you’ve just got a lot of admirers!” Then, turning to the tagalong cats behind us, I offered, “Would you ladies like to join us for lunch at Tank?”

When we arrived at the restaurant, Freddie took the lead. “We had a reservation for four but we’re going to need a bigger table,” Freddie said to the hostess, a sleek Siamese who didn’t look like she’d tolerate last-minute changes. Yet she surprised us, saying it would be no problem. (Since we’ve crossed the bridge, Freddie, Joey and I have spent a lot of time with cats, although we still have a hard time reading feline body language. One minute, you’re having a nice chat, maybe sniffing a hind end, and the next minute, the cat swipes you on the nose, claws out!)

As we entered Tank, Simon’s eyes got huge and his whiskers quivered. With its aquarium-lined walls, the restaurant has that effect on cats! “Order whatever you like — anything in the tanks, prepared any way you want,” I told him. Simon settled on tuna from the “Raw and Right Now” section of the menu — and his new feline friends ordered the same. Freddie, Joey and I, not big fish eaters, tried the fried frog legs. Yum!

As we ate, the cats told Simon all about the Catch Me If You Can Avian Hunting Grounds and Mole & Vole Village, two of the most popular parks among Rainbow Bridge cats. “And we should make a date for spa day at Fur Fluffers,” said a fluffy orange tabby, licking tuna off her whiskers. “They’ve got sudsy tubs for dogs, but for us cats, they’ve got giant bathing tongues that feel amazing!”

“I’ve never heard of such a thing,” Simon said. “But it sounds good, and I do like to look my best.”

After lunch, we parted ways with the other cats and headed to Simon’s new house. What a reunion he had with all the Moorefield fur babies! It took a while for everyone to catch up, then the dogs led the way to Simon’s room. It was quite the place, with ladders and steps for climbing into cozy beds that were perched alongside tall windows and up near the skylight. From the ceiling hung feathered and furry toys for swatting, and across the floor were scattered boxes and baskets — a feline favorite because they can be beds or toys!

Simon climbed into a shoebox, his fur cascading over the sides and declared the whole place “Purrfect!” As Simon explored more of his bedroom, Hugs and Kisses came in, carrying an unexpected surprise for me, Freddie and Joey: an invitation to a Puppy Bowl party.

“We’d love to come!” I said, offering to bring a platter of stuffed bones. Ever since that great shindig they hosted for all the pets of UNchain Winston volunteers a while back, your fur babies have thrown a bunch of parties. We’ve never turned down an invitation delivered by Hugs and Kisses: We always have a great time!

Knowing we’d be returning soon for the party, we said our goodbyes to Simon, who was starting to doze off in a little hammock slung under a sunny window. When we arrived a few weeks later, the house was packed, not only with your fur babies, but with a lot of the UNchain Winston pets, too: Foster, Lilly Jade, Isabelle, Wallace, Dixie, Blue, Jill, Fred, Freeda, Penny, Tucker, Clifford and even DB, another recent Rainbow Bridge newcomer. They’d turned the front yard into a little gridiron, and several of the dogs were playing football. We watched as Okami ran away from the pack for a touchdown, with Ryoku and Tenchi blocking. Moorefields for the win!

Inside, we found Simon and some of the cat friends he’d made that very first day in the living room, each reclining on a different level of an enormous cat tree and snacking on a party mix of dried trout, crab bits and shrimp flakes.

“Welcome!” Simon meowed. “Care for a shrimp flake?” Simon admitted he’s not a big football fan but he and the cats were eager to see Jenni-Purr Lopez and Cat-ira in the halftime show. And once they took the stage to sing “Catnips Don’t Lie,” we had to agree it was quite a performance!

It was a great Puppy Bowl, too. Freddie, Joey and I rooted for Team Ruff, but in honor of Simon’s arrival, your fur babies pulled for Team Fluff, which, of course, won! Simon seemed quite pleased by that.

“And now that the Puppy Bowl is over, it’s time for the best TV show of them all,” Skittles and Jinx said, working together to push 231 on the TV remote.

“This is my favorite part of life here across the Rainbow Bridge, watching channel 231 and seeing my family again every night before we go to bed,” Simon said.

“I was with them for nearly 20 years,” he continued, his eyes a little misty. “I will never forget how much they loved me. And I hope they never forget their Simon Puff.” 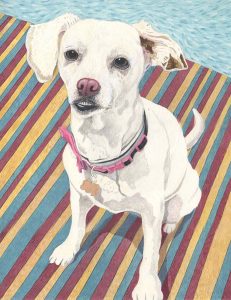 Shining like the gem she is, Diamond is Todd’s latest memorial portrait. After the loss a beloved pet, the most loving gift from a friend to honor for all time the loved they shared.