It’s always special for Todd to paint the dogs we know. Todd’s latest portrait is Lily Jade. This beautiful boxer girl was a big foster fail and will live out her life with fun and much, much love as part of our dear friends Adam Bowditch and Ann Marie Hull Bowditch wonderful pack. 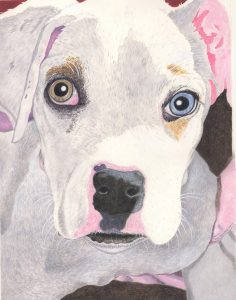 Love this cartoon from The New Yorker. 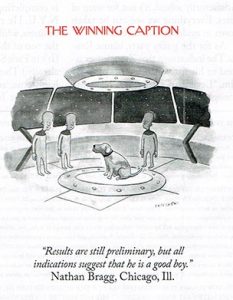 Happy Walk the Dog Day! Take a long walk with your best pal. It will be good for you, body and soul.

“A person can learn a lot from a dog, even a loopy one like ours. Marley taught me about living each day with unbridled exuberance and joy, about seizing the moment and following your heart. He taught me to appreciate the simple things-a walk in the woods, a fresh snowfall, a nap in a shaft of winter sunlight. And as he grew old and achy, he taught me about optimism in the face of adversity. Mostly, he taught me about friendship and selflessness and, above all else, unwavering loyalty.” — John Grogan 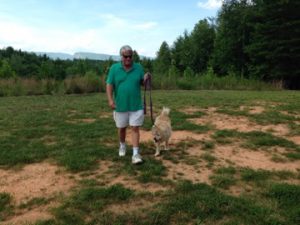 Happy Rescue-versary to our god dog Clooney. 12 years ago we found this precious boy wandering the streets. A friend was ready for a new pup and gave him the most wonderful forever home. Luckily, we’re all still great friends and he’s still a frequent visitor with his own guest room and bed! 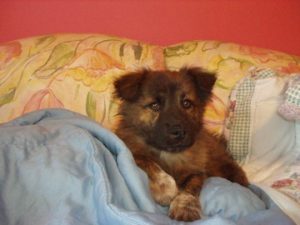 What could be better than a day hanging on the porch? Todd’s latest portrait of Charlie and Jaymie beautifully captures them forever in their favorite spot. 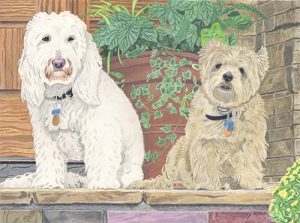 Our dog Freddie is always up for a celebration, so she was excited to hear that in the Chinese calendar the new year starts today and ushers in the Year of the Dog! Freddie is semi-retired as Jimmydog’s chief canine officer, but she’s planning a party and other festivities to mark the new year period, which goes until March 2.

Happy Year of the Dog! It was just a couple of months ago that I was celebrating my 15th birthday and now I hear we’re starting a whole year celebrating the dog. How exciting is that?!

Stephanie and Todd Belcher, the best people ever, tell me that today is the start of Chinese New Year. I don’t pay much attention to the calendar, preferring to go more by the weather to plan my days, but I could have sworn we just celebrated New Year’s. I remember because I had an extra special party with my chewy bones and stayed up until 8.

Anyway, Stephanie explained all about Chinese New Year although, to be honest, it was nearly time for my walk and I might have been a little distracted thinking about all the smells awaiting me. The part I remember is that Chinese New Year is based on something called a zodiac calendar, with each year represented by a different animal. And this year, it’s the dog! Yippee!

I am a little confused about why every year isn’t the Year of the Dog—at my house it seems like it is. But Stephanie tells me other years are devoted to the rat, ox, tiger, rabbit, dragon, snake, horse, goat, monkey, rooster and pig. I need to have a talk with whoever picked the animals. A whole year for rats? Guinea pigs, maybe. Did you see the painting Todd recently did of those cutie pies Penelope and Francis? But I have yet to see a cute rat, though I’m sure Todd could make one look nice if he tried.

Year of the Dog people also are said to be honest, popular and helpful. Again, the resemblance to me is uncanny. I’m the life of every party we have. Sometimes I must leave the room to stop stealing the attention of our guests, who always want to pet me and tell me what a good and pretty girl I am. (It can be a bit embarrassing.) And I’m super helpful. I’ve told you all before about the many jobs I do around here. Even in my semi-retirement as chief canine officer at Jimmydog, I stay busy with tasks like getting Todd out for a walk at least once a day and giving him advice when he wonders what creative choices to make with his latest custom pet portrait.

From what I hear, people born in the Year of the Dog also can be nervous and anxious. I can totally relate. I look calm and collected on the outside, but anyone who knows me knows I’m a worrier. It’s because I have such an important role in our pack—keeping everyone safe and sound and making sure the people who drive the brown truck and the red, white and blue truck never make it inside the house. Fifteen years and we’ve never had a single breach! But I must remain vigilant.

To celebrate, Chinese New Year, which lasts for many days, people spend time with their families, have big feasts with special foods, and carry out auspicious rituals. I like the idea of all that! It’s also a time of gift-giving and I hear the kids get red envelopes with money in them. Does this mean I’ll get a red envelop filled with my favorite doggy treats? That would be exciting.

I wish all my friends a happy Year of the Dog! I’ll be celebrating for a long time!

Imitation is the sincerest form of flattery and this latest portrait from Todd is a first. This client absolutely loves one of the paintings he did of Freddie and Joey and asked for her portrait to be based on that one. She sent great photos to work with and everyone loved the results. Meet Ace and June channeling their best Freddie and Joey. 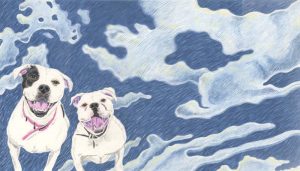 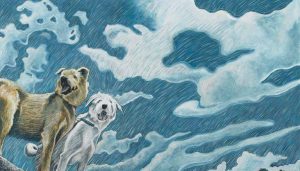