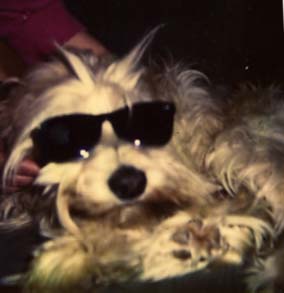 There once was a dog named Jimmy. We hope you enjoy more of Todd’s memories of this remarkable pup.

The first incident occurred at a hotel. We always took Jimmy on our trips, and one weekend we traveled to Athens, Georgia, for a surprise birthday party for Stephanie’s mother. On the evening of the party, we had to leave Jimmy alone at the hotel for a few hours. Jimmy was usually well behaved, but on this night — for some reason — he howled constantly, prompting the people in the next room to call the police. Luckily the hotel clerks were very understanding, and when the police arrived told themn it was a dog friendly hotel and all was well. Jimmy was saved from a night in the pokey.