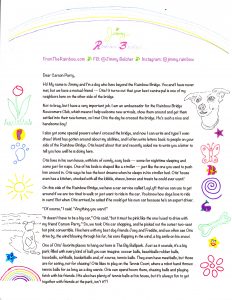 Hi! My name is Jimmy and I’m a dog who lives beyond the Rainbow Bridge. You and I have never met, but we have a mutual friend — Otis! It turns out that your best canine pal is one of my neighbors here on the other side of the bridge.

Not to brag, but I have a very important job. I am an ambassador for the Rainbow Bridge Newcomers Club, which means I help welcome new arrivals, show them around and get them settled into their new homes, so I met Otis the day he crossed the bridge. He’s such a nice and handsome boy!

I also got some special powers when I crossed the bridge, and now I can write and type! I even draw! Word has gotten around about my abilities, and I often write letters back to people on your side of the Rainbow Bridge. Otis heard about that and recently asked me to write you a letter to tell you how well he is doing here.

Otis lives in his own house, with lots of comfy, cozy beds — some for nighttime sleeping and some just for naps. One of his beds is shaped like a stroller — just like the one you used to push him around in. Otis says he has the best dreams when he sleeps in his stroller bed. Otis’ house even has a kitchen, stocked with all the kibble, chews, bones and treats he could ever want!

On this side of the Rainbow Bridge, we have a car service called LegLyft that we can use to get around if we are too tired to walk or just want to ride in the car. You know how dogs love to ride in cars! But when Otis arrived, he asked if he could get his own car because he’s an expert driver.

“It doesn’t have to be a big car,” Otis said, “but it must be pink like the one I used to drive with my friend Carson Parry.” So, we took Otis car shopping, and he picked out the cutest two-seat hot pink convertible. I live here with my best dog friends Joey and Freddie, and we often see Otis drive by, the wind blowing through his fur, his ears flapping in the wind, a big smile on his snout.

One of Otis’ favorite places to hang out here is The Big Ballpark. Just as it sounds, it’s a big park filled with every kind of ball you can imagine: soccer balls, beachballs rubber balls, baseballs, softballs, basketballs and, of course, tennis balls. They even have meatballs, but those are for eating, not for chasing! Otis likes to play on the Tennis Court, where a robot hand throws tennis balls for as long as a dog wants. Otis can spend hours there, chasing balls and playing fetch with his friends. (He also has plenty of tennis balls at his house, but it’s always fun to get together with friends at the park, isn’t it?)

All that running around can make a dog tired — and hungry. After a day at The Big Ballpark, Otis likes to stop by Tea for Terriers (and Everyone Else, Too!). His usual order at the tea shop is a cup of Pupper’s Pekoe Tea and maybe a Canine Cupcake or a Snoutful of Scone — or both!

Last week, I ran into Otis at the tea shop. That’s when he asked me to write you this letter.

“What else do you want her to know?” I asked, writing everything down as he talked.

“Hmm,” he said, thinking hard, his whiskers twitching with concentration. “Oh! You have to tell her about the TV!”

I forgot to mention that earlier when I was describing Otis’ house. Every house here on this side of the Rainbow Bridge has a TV. Animals can watch all their favorite shows: “Clifford the Big Red Dog,” “Lassie,” “Cat in the Hat.” But there’s also a special channel — unique to every house — that animals can tune to and watch their favorite people back on the other side. At Otis’ house here, it’s channel 1352.

“Tell her 1352 is my very favorite channel,” Otis said. “I watch every night as Carson Parry gets ready for bed, but also tune in a couple of times a day to watch her play with Pearl Monroe and Franklin Reeves. She is such a good and loving big sister! She takes care of them just like she used to take care of me.”

So, remember Carson Parry, even though Otis has crossed the Rainbow Bridge, he is always watching over you. And every time you see a rainbow, know that Otis is running up and down it, having a blast and barking, “Hi! Carson Parry! It’s me! Your best friend Otis!”